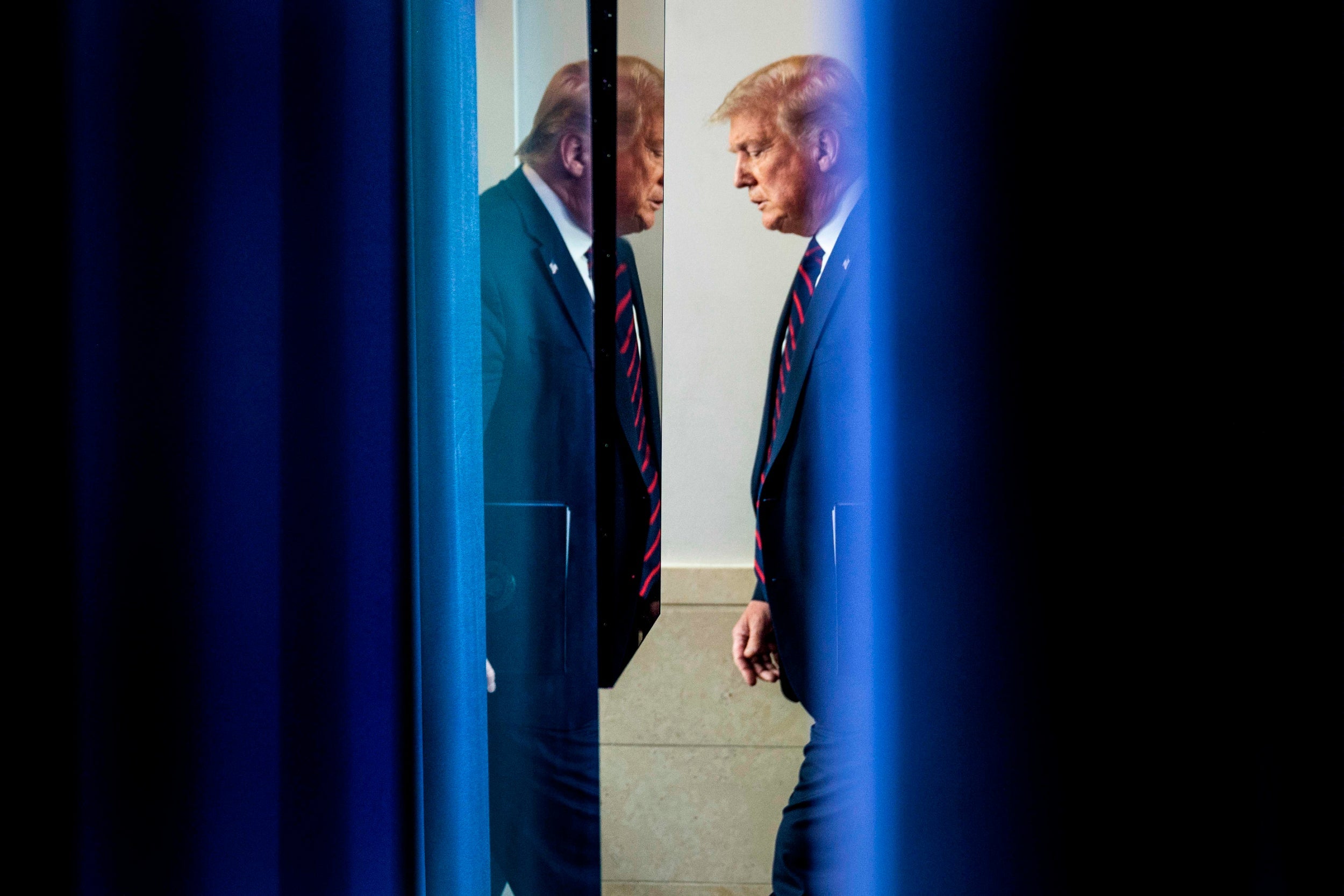 Donald Trump needed a pick-me-up. He got it Friday afternoon in his new home state, Florida.

He was slated to go straight from Air Force One at Tampa International Airport to a “campaign coalitions” event with Sunshine State sheriffs. But as the executive jet neared the west Florida landing strip, reporters tweeted photos and video of the scene: a presidential lectern was set up along with loud speakers opposite hundreds of Trump-gear-clad supporters.

What unfolded was some sunshine-soaked political Prozac for a commander in chief who spent most of the week noticeably downtrodden – even sounding rather sad.

Mr Trump seemed perplexed, frustrated and blue on Tuesday night as he all but pleaded with reporters to believe his contention that he gets along well with Anthony Fauci, the top federal infectious disease official. He also claimed, despite the two countless times since the Covid-19 outbreak hit in March contradicting each other, he agrees with much of what Mr Fauci says.

His conclusion, amid low poll numbers across the board and deficits against former Vice President Joe Biden in just about every 2020 swing state? “It can only be my personality, that’s all,” he said.

The president seemed running in a lower gear – by his frenetic standards, that is – all week.

His revived coronavirus briefings this week mostly lacked the controversy and razzle-dazzle that characterised them during the early weeks and months of the outbreak. He seemed a bit lethargic during a Thursday roundtable at Red Cross headquarters here.

‘It will be rigged’

The president appeared more energetic, but visibility angry on Friday morning when he met with law enforcement officials in the Cabinet Room. He railed against Democratic leaders over stalled Covid-19 relief legislation. And his face grew red as he predicted November’s election may never end, too marred in uncertainty by what he calls a crush of fraudulent ballots – then ones showing up to be counted well after 3 November.

“You’ll see what happens. It’s common sense. Everyone knows mail-in ballots are a disaster. You just have to take a look at the last recent, take a look at New York City. Look at New York. They are still counting your ballots,” he said. “They had a race, small race by comparison. By comparison, tiny. It’s so messed up they have no idea. There are ballots missing. Thousands and thousands of ballots are missing.

In a statement that revealed a lot about his assessment of how his re-election bid is going, Mr Trump then added the money quote: “It will be fixed, it will be rigged. People ought to get smart.”

In short, this did not look nor sound like a president who was enjoying himself this week. Until he got to Tampa, that is.

Using both Air Force One and “The Beast,” his heavily armoured Cadillac limousine as a background few would refuse to label as cool and politically effective – the spoils of incumbency – he instantly looked and sounded like himself again.

He lambasted “Crazy Bernie” Sanders and “Pocahontas,” his derisive nickname for progressive Massachusetts Senator Elizabeth Warren. When he brought up Congresswoman Alexandria Ocasio-Cortez, he sarcastically called her “a beauty,” referring to her very liberal policy views.

Mr Trump contended the 77-year-old Mr Biden, just three years his senior, has lost a step mentally, saying the former VP is unaware what’s happening at any given moment.

When his own rhetorical cues took him to Minnesota Democratic Congresswoman Ilhan Omar, a supporter yelled something that caused even Mr Trump to resist. “You’re going to get me in trouble,” he said, referring vaguely to his past comments about her that many deemed racist.

He was just getting started, seemingly recharged by the crowd and the Florida sun.

“They want to defund the police,” he alleged of Democrats, saying falsely one more time that doing just that is in “Bernie and Biden’s manifesto.” Their joint policy document, however, calls for increasing police funding, but making some reforms to how America’s departments do their business and interact with civilians.

He sang his own hits like a rock star on stage for the first time in months.

Mr Trump then slammed Democrats, including his presumptive general election foe over what he called their shared “anti-police agenda” before promising that as long as he is in power he will “ensure cop killers receive the death penalty” – even though that’s up to states.

Like at those rallies that have been paused after the poorly attended one in Tulsa, Oklahoma, due to coronavirus concerns, Mr Trump boldly predicted victory in the fall — despite trailing Mr Biden by nearly 7 points in some crucial swing states and by 7.8 points nationally in the RealClearPolitics average of a handful of surveys.

“Those polls are going up, up, up,” he declared.

The statement defied reality and data. But when has either ever been on the marquee at a Trump rally? More importantly for Mr Trump’s campaign team and re-election chances, it was delivered with his signature showman’s gusto.