Follow the latest updates live from the British Grand Prix as Silverstone hosts the first of two back-to-back races with Lewis Hamilton starting from pole position.

The home favourite does not have the normal support of the British fans as the Grand Prix takes place this weekend without fans due to the coronavirus measures, which has also seen Sergio Perez ruled out of the race after he tested positive for Covid-19 on Thursday evening.

It means a return for Nico Hulkengberg in the Racing Point, who despite appearing to have enormous pace in the car disappointed in qualifying as Max Verstappen took third behind the two Mercedes, with the Ferrari of Charles Leclerc in fourth ahead of another British driver in McLaren’s Lando Norris. Follow the live action below.

Lap 34: I think Verstappen, who is 10 seconds behind Bottas and 18 seconds in front of Leclerc, is a fair bit bored…

Lap 31: Albon pits for the second time, with Red Bull serving the five-second time penalty that he was handed for crashing into Magnussen. It means they have to wait an agonising five seconds before changing the tyres, sending him back out in 17th and last position.

It appears a view unexpected guests have managed to find their way into Silverstone, with protestors from the Extinction Rebellion group spotted at the track before the race got underway. Fans are of course not allowed to attend the race, but questions will be asked over how they managed to gain access to the circuit. 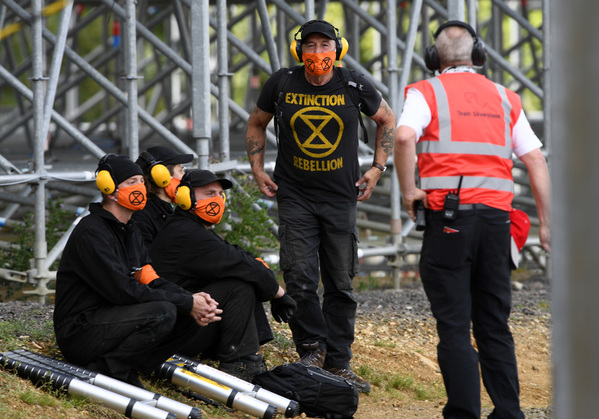 Lap 26: Grosjean has been shown a black and white flag for his swerve in defending against Sainz, with the stewards giving him an official warning after taking a dim view of his driving so far.

Lap 25: Norris follows his teammate’s example and repeats the overtake into Stowe to take sixth from the Haas driver.

Lap 24: In all of that chaos, Albon has been given a five-second penalty for taking Magnussen out of the race, which will be added to his overall time if he doesn’t pit again.

Lap 22: This time around Grosjean can do nothing to stop Sainz from flying past into Stowe, with the Spaniard complaining about his defensive moves on his team radio. Regardless, he’s back into fifth.

Lap 22: Sainz has his first run at Grosjean, but the Haas driver will not go down without a fight in the battle for fifth and holds the McLaren off through Stowe.

Lap 20: Ocon has quickly dispatched Vettel to move back into the top 10, and he’s now right on the back of Stroll in an effort to move up to ninth.

Lap 19: Grosjean is going to back up the pack and it’s allowing Norris to have a go at Ricciardo, and he snatches seventh from the Renault around the outside of Luffield. Not content with one, Norris tries to take Sainz around the outside of Copse, but loses the rear end and has to take to the run-off that lets Sainz off the hook.

Lap 18: With 18 laps in the bag already, we’ve only had a third of it in racing conditions due to the two safety car periods.

Lap 17: This is taking a while to clean up, such is the amount of debris out on the track. Hamilton meanwhile is getting impatient behind the safety car and is asking for Bernd Mylander to speed up as his tyres are going cold.

Lap 16: Good guy Pierre Gasly radios the team to check that Kvyat is ok, having seen the hefty accident in the knowledge that cars approach that area of the track at close to 190mph.

Lap 15: So with everyone on hard tyres apart from Grosjean, the field should be good to go to the end of the race without stopping again, which means any overtaking is going to have to be done on the track. Ocon has lost out to Vettel during the pit stops after being held for traffic, while Sainz has maintained his position ahead of Ricciardo in the battle for fifth – though now has the Haas of Grosjean in front.

Lap 14: Hamilton, Bottas, Verstappen and Leclerc all pit and leave in the same order that they came in, with Grosjean up to fifth by virtue of not stopping.

Lap 13: Daniil Kvyat has gone off in a big way, with his Alpha Tauri losing the rear end on the entrance to Maggotts in what looks like a reliability issue.  He slams into the barrier on the outside of Maggotts and destroys the car, but thankfully he hops out the car and looks to be unhurt. That was a scary one.

What time does each session start?

How can I watch it?

All European races will be held behind closed doors, meaning that the only way fans will be able to see the action is on television.

In the UK, Sky Sports continue to hold the exclusive rights for F1, but Channel 4 is able to show every session from the British Grand Prix live this weekend.

If you’re not a Sky customer you can purchase a NOWTV Day Pass here to watch without a subscription.

Here’s how Sky and Channel 4 plan to show the British Grand Prix:

We may earn commission from some of the links in this article, but we never allow this to influence our content.

With Sergio Perez ruled out of action, Racing Point will have to make a decision on who to replace the Mexican with as they intend on racing two cars this weekend. Esteban Gutierrez is one option, with the Mercedes reserve driver the allocated back-up for Racing Point this weekend as Stoffel Vandoorne is unavailable. But Gutierrez has not raced an F1 car since leaving Alfa Romeo (formerly Sauber) at the end of 2014.

A more recent and likely option is Nico Hulkenberg, with the German missing out on a seat in 2020 after being replaced at Renault by Esteban Ocon. Hulkenberg drove for the Racing Point team in their former guise as Force India in 2012 and from 2014 to 2016.